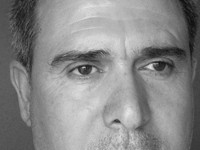 Yasser Alhaji is a Syrian journalist and former  football star who played on the Syrian national teams for many years before moving to America to work as a  journalist for Syrian media covering the United Nations.  Along with being a journalist Yasser also was the football coach for 5 years at Suffolk college located in Long Island NY. Yasser returned to Syria from Greece once the Revolution for independence took hold in his country in order to work as a media activist.

As a member of the Free Syrian media organization Yasser has aided many western journalist in their reporting.  Yasser has worked closely with Robert King and with numerous other reporters from the New York Times, BBC, Vice Media, RTL, La Figgero, and RTL just to name a few.

Yasser joins Berlin Fotofestival 2013 THE BROWSE to share his experience as media activist and fixer for Western (photo-) journalists with a talk on Sunday June 16th at 4 pm focusing on media activisim of local community opposition in Syria today  and provide his insights on the current situation in Syria and what the media could do to help civilian victims of the brutal war in Syria during a screening and talk with Robert King and Franco Pagetti Sunday evening at 8pm.