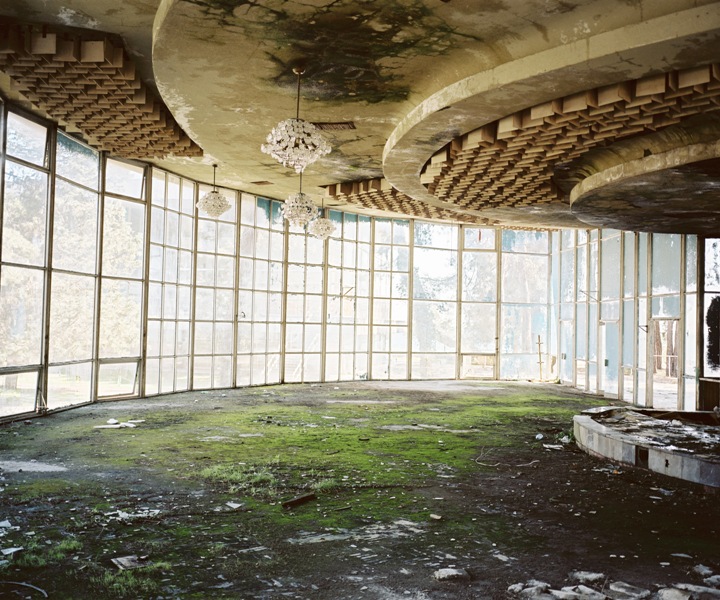 Mapping a future for photojournalism by Rob Hornstra and Arnold van Bruggen
In 2009 dutch author and filmmaker Arnold van Bruggen and the dutch photographer Rob Hornstra started their 5year project on Sochi (Russia). The small city at the Black Sea is the location for the Winter Olympics early  in 2014. The duo wants to document the change the city is going through throughout the preparations for the big event.
There are many reasons why the world is so fascinated by Russia: the vastness, the spirit, politics, richness and poverty at such expanse, the variety of ressources, the diversity and monotony that are happening at the same time. Thus the country and its complexity are hard to understand for citizens, how about strangers? Rob Hornstra is such a stranger. As a student he came to Russia for the first time and is retruning ever since to portray the country. His images and their perspective show a nation in a transit state.

2009-2014, period of the Sochi Project, which is a mix of photography, film and reportage. The change Russia is going through can be well observed in this small but extraordinary place. Never before where the Olympics held at in such a tumultous region, that is such a big contrast to the glamourous games. The conflict region of Abachasia is only 20 kilometers away. To the east the Caucasus Mountains stretch into obscure and impoverished breakaway republics such as North Ossetia and Chechnya. On the coast, old Soviet-era sanatoria stand shoulder to shoulder with the most expensive hotels and clubs of the Russian Riviera. By 2014 the area around Sochi will have been changed beyond recognition. The transition is well under way. Impoverished resorts and refugee buildings are replaced and pushed aside. Thousands of workers from all over Russia are put into prefabricated houses, to guarantee the completion of all the hotels and stadiums and of a modern infrastructure. The economic crisis is covered up as good as possible.

Project: Empty land, Promised land, Forbidden land (2010)
In Empty Land, Promised Land, Forbidden Land photographer Rob Hornstra and writer Arnold van Bruggen explore the unknown country Abkhazia on the Black Sea. Abkhazia broke away from Georgia after a short, violent civil war in ’92-’93 and was recognised as independent in 2008 by Russia, Venezuela, Nicaragua and the atoll of Nauru. Hornstra and Van Bruggen spent the last four years travelling through the country, seeing how it is slowly trying to claw its way out of isolation. They visited the refugees in Georgia and described the attempts made by the Abkhazian government to repopulate the empty, war-ravaged country with new immigrants.
——————–
Project: On the other side of the mountains (2010)
‘On the other side of the mountains’ is a story about Krasny Vostok, a village with one foot in the 19th century, still partially without gas and electricity. It is barely 200 kilometres from Sochi, but a world away. There is no reason to portray this village; and that’s why we did. The Caucasus is more than just conflict and refugees, fundamentalist Islam or billion dollar Games.
——————–
Project: Sochi SIngers (2011)
The southern Russian city of Sochi lies on the Black Sea. It attracts predominantly Russian holidaymakers who come for a mix of sun, sea, sand and nightlife. Restaurants are plentiful and competition is fierce. In the past decade, Soviet interiors have been mostly replaced by an eclectic mix of Roman, Greek and other unidentifiable cultural elements. Every restaurant employs a regular live musician. From behind a laptop, they blast Russian chansons and popsa into the restaurant through a wall of speakers. This renders any kind of conversation impossible. But that’s not the reason why Russians go to a restaurant.