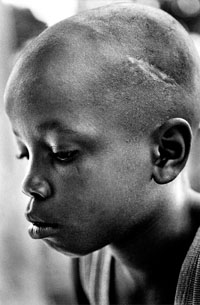 June 2000, Freetown, Sierra Leone. Ali Kondo, 10-years-old, was with the RUF for two years. His Commander, known as “Killer” was beating him because he couldn’t carry an AK 47 assault rifle. The scar on his head is the result of a machete used by his commander when he cried as the other children in his unit killed his father. © Franco Pagetti

Born in Varese, Italy 01/22/1950, Pagetti has been a news photographer since 1997, and most of his recent work has involved conflict situations: Afghanistan, Kosovo, East Timor, Kashmir, Palestine, Sierra Leone and South Sudan. Since 2007 he is a member of VII photo agency.