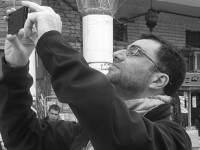 Patrick Baz is French-Lebanese photojournalist, born in Beirut in 1963. He was twelve when war broke out in Lebanon in 1975. Living not far from the demarcation line separating the Christian and Muslim zones, Baz was stimulated by what was going on around him to take up photography at an early age. Lebanon became his training ground. In 1989, Baz joined Agence France-Presse (AFP) as Chief Photographer for Israel and the Palestinian Territories, covering the First Intifada in Gaza and the West Bank, the First Gulf War in 1990, and later conflicts in Kurdistan, Somalia, and Bosnia. Baz is Middle East and North Africa  photo manager for AFP, but continued to cover conflict zones, serving as AFP bureau chief in Baghdad from 2002 to 2003.

Award winning photographer, Baz was also a member of the World Press Photo jury in 2009 and 2012 and The Bayeux Calvados Award for War Correspondents.

Baz is also the author of the book, Don’t Take My Picture Iraqis Don’t Cry, a photo-diary matching pictures of the war in Iraq since its beginnings with journal entries.