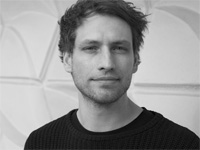 His Instagram following is always growing, now at about 100,000 fans, and he’s been gaining an unexpected and overwhelming amount of attention from different media outlets.

Berlin, as a place of yearning, is the visual marker of his photos. It is more the city than its people that serves as their main element. Viewers are drawn to his fascinating point of view of the usual and common.