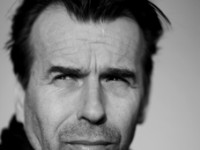 Geert van Kesteren (1966) is a photographer based in Amsterdam.
His photography is acclaimed for a cinematic feel of storytelling; an author with a camera that gives insights into the psyche and soul of conflict.

His landmark books, ʻWhy Mister, Why?ʼ and ʻBaghdad Callingʼ about the war in Iraq, serve as a new model for the possibilities of engaged and innovative documentary.
He is recipient of several major fellowships from the BKVB, Mondriaan and D&M
Foundations and was awarded the Infinity Award 2009 in Photojournalism from the ICP inNew York, a World Press Photo award and several ‘Best Books’ prizes. His work isrepresented in the collection of the Dutch Photo Museum and Rijks Museum and presented in most major international magazines, formost Newsweek and Stern magazine.

Van Kesterenʼs photographs have been featured in numerous solo and group exhibitions, including the Dutch Photo Museum, Recontres dʼArles, Visa dʼOr, the British Museum and the Barbican Art Gallery in London.His first monograph, ‘Mwendanjangula! Aids in Zambia’, was published by Mets & schilt in 2000. Since then Geert van Kesteren has published ‘Why Mister, Why?’ (2004, Artimo) and Baghdad Calling (2007, Episode). Both books, reflecting on the war in Iraq, became instant-classics.

Van Kesteren was a nominee at Magnum Photos (2005-2008) and since 2006 in the Advisory Board of World Press Photo. He exhibited ‘Nunusaku’, a universal story about identity and migration, a project in collaboration with his wife, photographer Conny Luhulima in 2011. In 2014 Van Kesteren will launch ‘After the Ceasefires’. A long term project that hopes to find answers to the question why the people of Israel and Palestine no longer allow themselves to dream about living in peace?