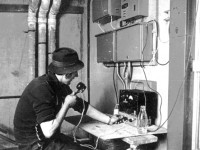 Eamonn Melaugh in the 1960s and early 1970 participated in, and photographed, events in Derry that were to have much more local, national and international impact than any of those involved could ever have imagined. As a committed socialist Eamonn began actively campaigning to try to improve living conditions in Derry, to force the Unionist controlled Londonderry Corporation and the Unionist government at Stromont in Belfast to introduce policies that would deal with the twin problems of unemployment and housing. During the late 1960s and 1970s Eamonn was actively involved in community issues and local politics in Derry. He was routinely arrested by the security forces for his role as organiser and participant in demonstrations. Eamonn witnessed many of the pivotal events in Derry and was part of the demonstration on ‘Bloody Sunday’ on 30 January 1972. He was subsequently an active member of the Workers’ Party. Eamonn Melaugh was a keen amateur photographer for many decades and regularly carried a camera.