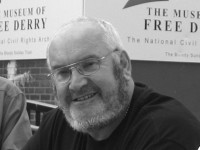 Barney McMonagle first took up photography in Derry aged 24, in 1968, just as the situation in Northern Ireland was beginning to transform so radically. He felt that what was happening had to be documented, and, with his camera, attended most of the major protests and disturbances, taking more than 1,000 black and white photographs of the events between November 1968 and the late summer of 1971. He remembers his feelings during the riots, recalling a sense of excitement more than danger. To most of those involved it was unthinkable that this could lead to the widespread death and destruction that followed, and to similar scenes being repeated in the city almost thirty years later. The real danger was brought home to him in the late summer of 1971 when, as he was taking photographs during a disturbance in William Street, a soldier, possibly mistaking his camera for a gun, took a shot at him, missing him by inches. He never took another photograph of a riot.