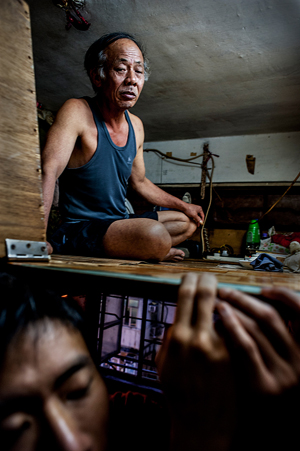 In Hong Kong, one of the world’s wealthiest metropolises, there are around 130,000 people living in cages. While ever more luxury shops open just a few streets away, many inhabitants can no longer afford the increasing rents. To avoid living on the streets, they move into wire cages, apartments subdivided into tiny cubicles or coffin-sized rooms – their entire world reduced to a few square metres, a life shared with strangers.
About one fifth of the cages are occupied by new arrivals from mainland China, dreaming of an escape from their poverty and trying their luck in the prosperous mega city. one hundred and fifty people are permitted to immigrate every day. For many however, the cages have become more than just a temporary shelter: elderly people, drug addicts, former convicts, the mentally disturbed and day labourers often live here for decades.
Hong Kong’s poor people are struggling day in and day out to keep their heads above water. It is most scornful to see economic development bringing social inequality. These deprived people cannot enjoy their economic success. These people have been snubbed and have fallen into oblivion.